A and I were married in 2009, but have been together since 2004. Our personalities belong to the opposite ends of the spectrum, but I guess it's what brings spice to our daily lives. We've had out trying times, but we've managed to use our differences to work together. Everyday is still an adventure as we learn new things about ourselves and each other. 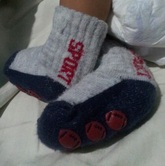 Scout's our firstborn. It's pretty much a sleepless night (and day) marathon on some days. He actually sleeps long hours, but feeds for long hours too. Looking at him, I'm quite amazed as to how babies start out so small.

She's our 13-year old dog (that's 91 in dog years), She came to me as a 2-month old pup on the Christmas of 2000. Can't take away the dog from the girl, so she moved in with us after getting married. Took a while for A and S to get along..more of who gets to be the one with authority in the household (plus the fact that A was talking to S in Chinese!). At least they're more than civil to each other now and so our story continues... 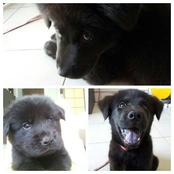 She joined the family sometime January 2013 as a 1-month old pup given to me as a gift by a former student. Drove A nuts as he's never taken cared of a pup before...let alone trying to manage 2 dogs. He got the hang of it over time and the girls see him as an authoritative figure now (or at least pretend to make it look that way). They still drive him crazy at times though =)